“Dumbass games from Professor Choron” (http://en.wikipedia.org/wiki/Georges_Bernier)
The problem is that “con” also means the female genitalia in french but that’s rarely used and
not widely known even from frenchs. Then I don’t really know how to translate it correctly. “Know how to make artificial digestion” [Sorry, can't find for the moment a correct word to
better translate “pratiquer” than “make”]
On the belly you can read: HERE and NOT HERE 14th of July (our 4th of July if you are from the USA)
“Day without pants” but that’s a pun because during the revolution, some guys were called
the “sans culottes” See here: http://en.wikipedia.org/wiki/Sans-culottes “In this issue, wealthy people in holidays” “September: Diarrheas are back” “Summer fashion: Completely naked on the beaches” (once again, a pun. “À poil” meaning
totally naked, thus you can see the body hair which is the “poil”. Pronounce po-al) (My favourite one!!)” Euthanasia: Should handicapped Christmas turkeys be killed?” Nothing, and I don’t even get the point. Maybe something pornographic like small ivory dick on
ebony chick. Dunno.
Or it could be another pun. Let’s assume this is a mice. “Souris” or mice in french is another
word to say “tampon”. You know, Tampax like. 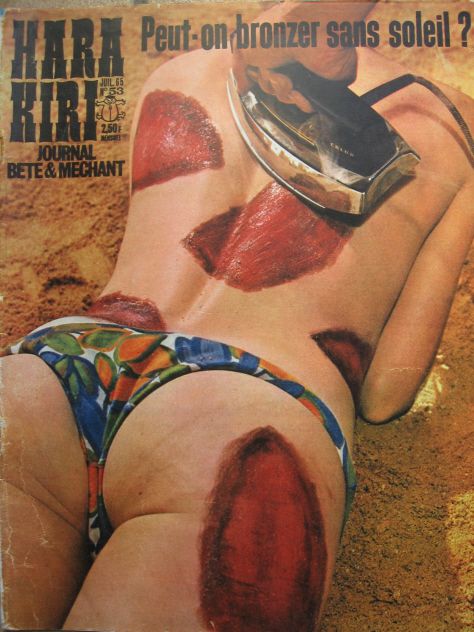 “Can one tan without sun?” “I wanted to abandon him but he didn’t want to”. (Or a little less literraly: I wanted to drop him
off but he wouldn’t let me do.) “Fetch Darling, here comes the spring!” (Titine can’t be translated, it’s something you say to
someone you love but that was not very beautiful, even at that time. Now it’s rarely used).
(I used fetch to avoid 2 times “here” which would be awful to read, but if you want to be accurate
you’d better go with 2 “here”). I seriously don’t get it.
1 hypothesis but I really doubt that it will be relevant. (This fish could symbolise a thuna, and in
french when you want to make fun of a fugly girl you call her a “thon” (thuna in english).) 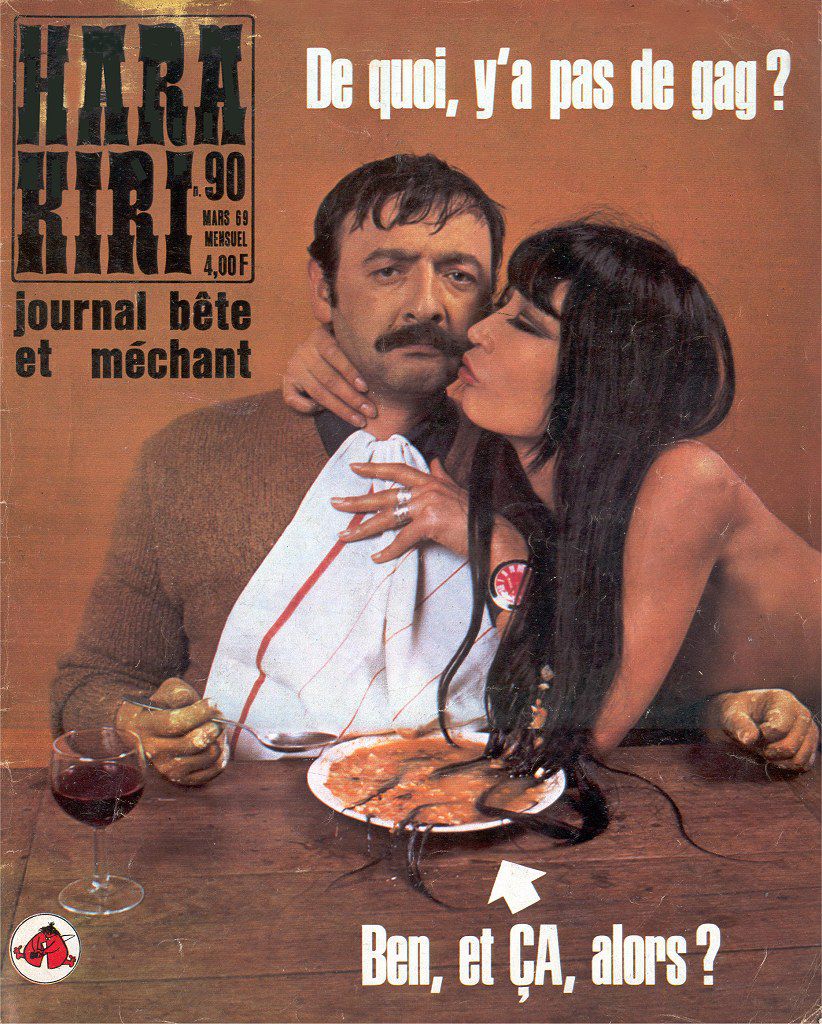 “If the left wing (democrats or labour party if you want) wins we take our hands off!”
(the right wing won introducing Valery Giscard d’Estaing as the youngest president of the 5th Republic) Christmas: Think of the poorly liked” (if you have a better translation go on). “Invite a cop!”
(I think I see a bit of chicken in his mouth, so there’s another pun. Chicken being a slang word
for cop in France.) (Not because they are cowards or something like that, but I can’t tell you
exactly where does this name come from). “The army gives you a job!” “Harvest mushrooms” (cultivez is also the imperative tense for “teach”, there might be a hidden
message that I can’t figure..”.) “Hello! Who’s that?” (a little like KNOCK KNOCK WHO’S THERE?) 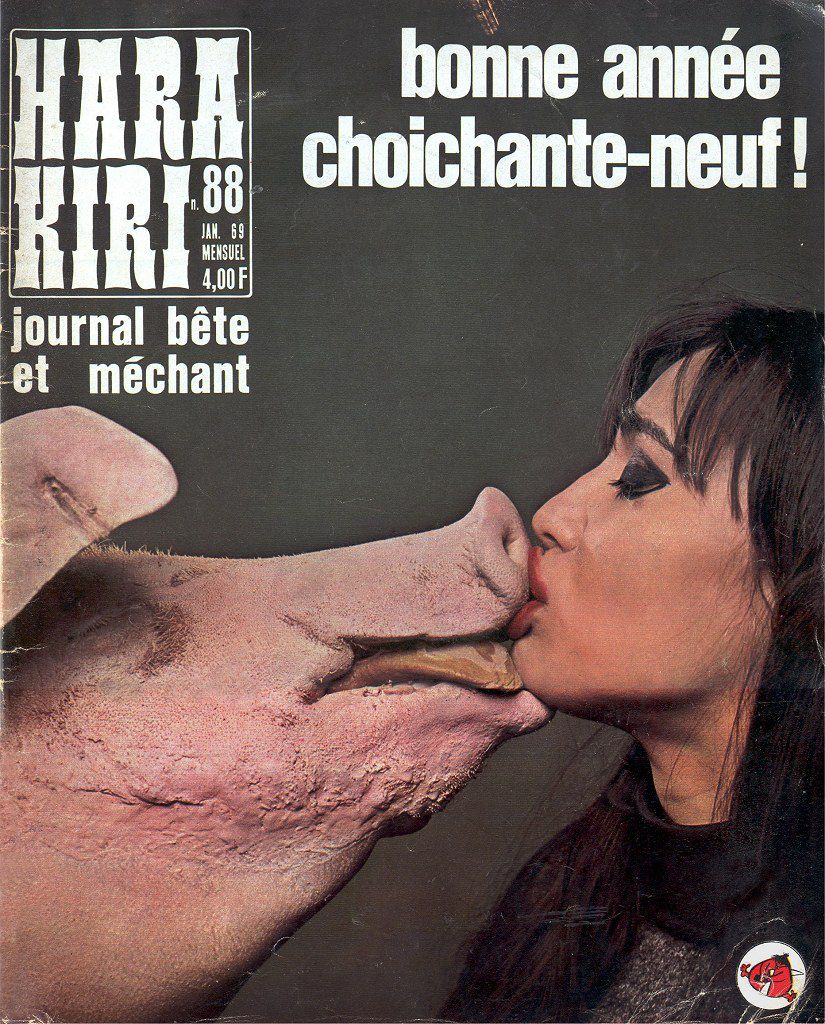 “Happy year shitsxity nine!” (imagine saying 60 like if you were a talking pig. Plus, 69 is the
name for a sexual position in french, dunno if it’s the same name in english. And when you
are much into sex, in France you are often called a pig (friendly or not) or a cochonne (female pig),
the picture might make more sense with those explanations). 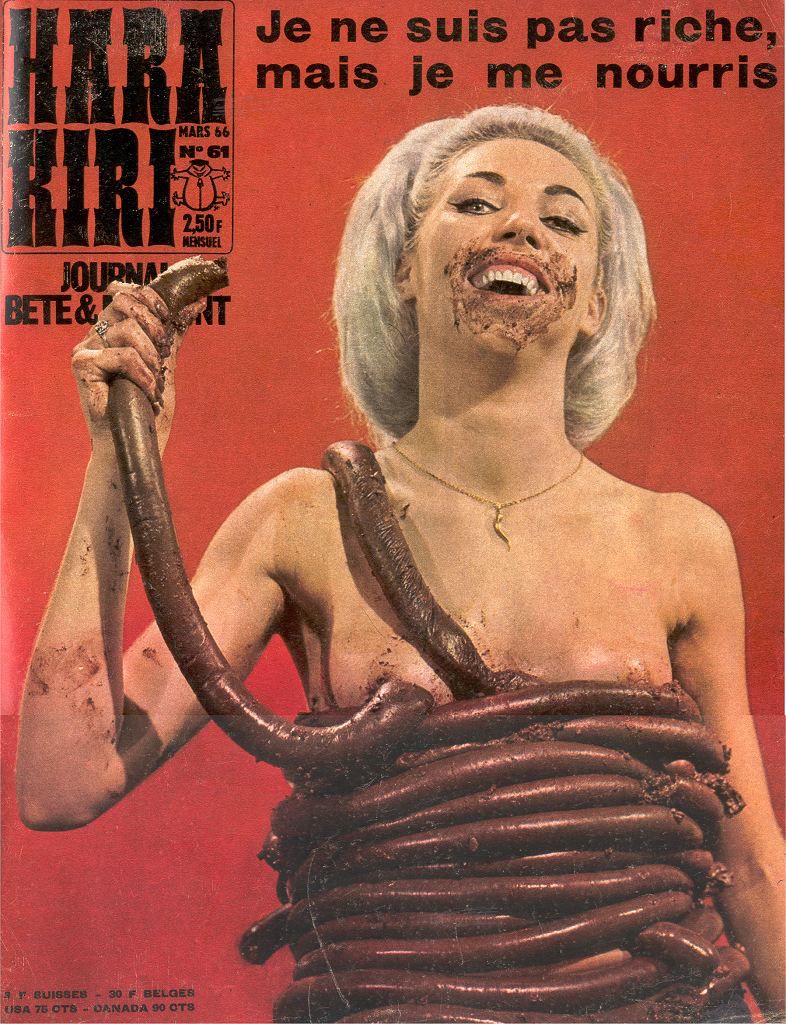 The turkey is yelling “MERRY CHRISTMAS!”